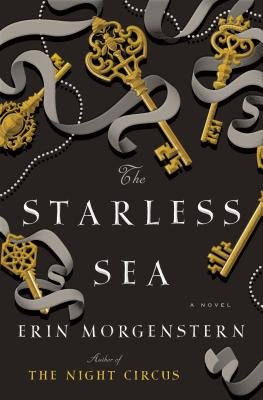 The bestselling author of The Night Circus is back with something very different yet also familiar in The Starless Sea.

Erin Morgenstern had readers fall in love with her immersive fantasy world in her debut novel. Those looking to recreate that experience may be disappointed as The Starless Sea is styled very differently, however her knack for creating a fantastical and multidimensional world is all here.

“Far beneath the surface of the earth, upon the shores of the Starless Sea, there is a labyrinthine collection of tunnels and rooms filled with stories. The entryways that lead to this sanctuary are often hidden, sometimes on forest floors, sometimes in private homes, sometimes in plain sight. But those who seek will find.”

On the one side, we have a story about a man named Zachary Ezra Rawlins, who, upon finding a book in which he is part of the story discovers a much bigger world beneath his real one. Zachary and the people he meets are all part of an old story that will change the fate of this hidden world.

The big strength of The Starless Sea and the thing that had me eager to read all 500 pages was the way Morgenstern tells stories via any sense and medium- built, sculpted, written, carved, heard, tasted, etc. It’s this writing that had readers love The Night Circus and what makes this book worth reading.

What I also like from her is that even though she’s writing this gorgeous prose dripping with opulent and tasty language she doesn’t stay so serious. Zachary’s general bemusement at his situation results in a lot of beautiful lines said in a funny matter-of-fact way: “he had no idea how to go about finding someone that had been lost in time at the behest of ghosts of former books.”

The book reads more like a long myth than a straightforward novel. For some, (I made the mistake of reading another review, so I’ll address it) this may be a con. For me, it was not, and made for a totally fresh reading experience.

The linear action is often stopped to read excerpts from the books hidden within Morgenstern’s mythical library on the sea. Myths and fairytales are woven throughout and each are beautiful and a delight to read. Despite being varied and stylistically different they hint at a larger story all along. It gives the effect that the reader is piecing together an ancient mystery. And there are pieces to be put together.

The book ends up reading almost as a choose-your-own-adventure that got turned into a full novel (in fact a character in the book mentions doing exactly this with her own work)- with every path, choice, microstory thrown together with a loose thread rather than separated by the path the reader chooses. This also extends to there being some threads that can be followed and some that are a dead end. Some may find this too meandering but I found it to be intriguing and it pulled me in further. It’s also the right feel considering our main character is a video game nerd, a fact which comes up a few times and was fun in a highly fantastical setting.

One slight flaw for me was that as things get weirder we don’t quite get the character development that you might from a more concrete work. Yet, the characters reading more as archetypes felt expected. In a fairy tale characters are mostly there for you to follow on a journey than to be people- and these definitely still seem like real people.

The lack of concrete resolutions and full-on exposition about which parts meant what may be frustrating for some which is why I called it disappointing to fans of Morgenstern’s previous book. This work is mainly a beautifully written meditation on how and why we tell stories- constructed out of original fairytales with a plot about the fate of a world of stories holding it together.

The Starless Sea was a memorable experience; go out and read it at your leisure.

The Starless Sea is now available from Doubleday.

The Furious Gazelle received a copy of this book in exchange for an honest review.

Eoin Colfer in conversation with Charles Soule in NYC